An Israeli watertech company, Blue Green Technologies, cleaned up the Setumo Dam in the North West Province on the Molopo River of the contaminated toxic algae blooms making its water unsafe to drink. It was basically a dead aquatic zone. The South African Director of Blue Green Technologies, Jurgens van Loggerenberg, told BizNews how the company’s technology achieved this, how they saved a canoe race on the Roodeplaat Dam, the story about a fisherman who covered himself in Vaseline to protect himself from the toxic algae and the link to elephants dying in Botswana. – Linda van Tilburg

The Setumo project was a massive milestone for South Africa. We face a big challenge with all of the wastewater works that are run over capacity and dysfunctional. They discharge quite a lot of effluent into our dams and river systems. And because of all of this pollution and the load of organic material, we have a big challenge with cyanobacteria, also known as blue green algae. What a lot of people don’t know is that this is very toxic. So, there are a lot of toxins being released by this species in the water bodies, and that is quite challenging for us because conventional water treatment processes do not remove these toxins.

On how the state is discharging non-compliant effluent into the dams:

It’s the leaching, all of the discharge from the wastewater works in it. And if you’re going to look at Setumo Dam, it is an isolated body of water that is fed mainly by two wastewater treatment works. The problem is, because of the low rainfall, the dam wall was built so that it overflows. At this stage, the dam can’t overflow as the dam is relatively empty, so these nutrients collect in the water and the high concentration creates the ideal environment for the cyanobacteriat.

Imagine a bowl of green pea soup; I don’t think I can explain it better. It is the thick scum of green matter on top of the water. You have a lot of fishermen around the dam and when they wade into the water, they leave a trail of clear water behind as the scum moves away. I’ve selected this specific dam for the trial because I think it’s one of the worst polluted dams in the country. 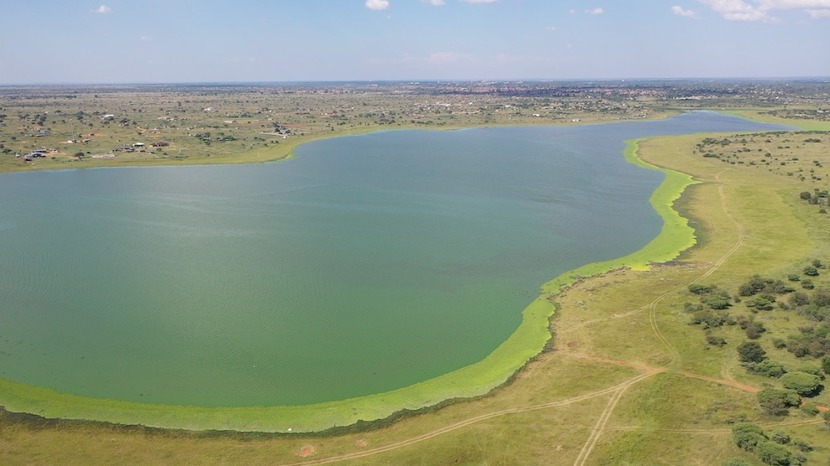 On the technology to clean up blue-green algae:

The technology is very interesting. When they developed this specific technology in Israel, they were faced with the same problems we have here in South Africa because it’s a water-scarce country and they rely on a lot of recycled wastewaters for their irrigation systems and nets, and hence they had a problem with the cyanobacteria. While researching cyanobacteria, they found that if you put these cells under stress, they give off chemical signals between the cells to convey they are experiencing discomfort and it’s not a suitable environment and the whole population then starts dying off. It’s what they call programmed cell death.

It is a little chemical process; you use so little chemicals that there are no traces of chemicals at the end and it breaks up into water and oxygen. So, it’s a completely environmentally friendly, safe product to use. It’s amazing technology. When we wanted to approve the technology in South Africa, every country is different and they want to see if it works in their surroundings because they don’t trust trial papers from different countries. That’s one of the reasons we also picked Setumo Dam because we know it was one of the biggest challenges in South Africa. The results once we finished with the treatment, you could literally see the bottom of the dam. It was phenomenal.

On a local fisherman’s unique way of protecting his skin from blue algae:

The dam is situated a short way out of town. We went back because we did some post-monitoring as well. We caught up with one of the fishermen and we asked if we could interview him and record it on a phone. And he had such an amazing story. Every time, before he entered the dam, he had to cover his whole body with Vaseline as the cyanobacteria excrete different toxins. One of these is a dermotoxin that irritated his skin quite badly. Only once he had applied the Vaseline, could he then go into the dam. The fishermen have got little floats and tubes and kayaks that they used to put out their fishing nets. He says he doesn’t need to do that anymore; he just walks into the water, takes his nets out there, and he gets to pick the size of fish he wants to keep for his nets because there’s now an abundance of fish. 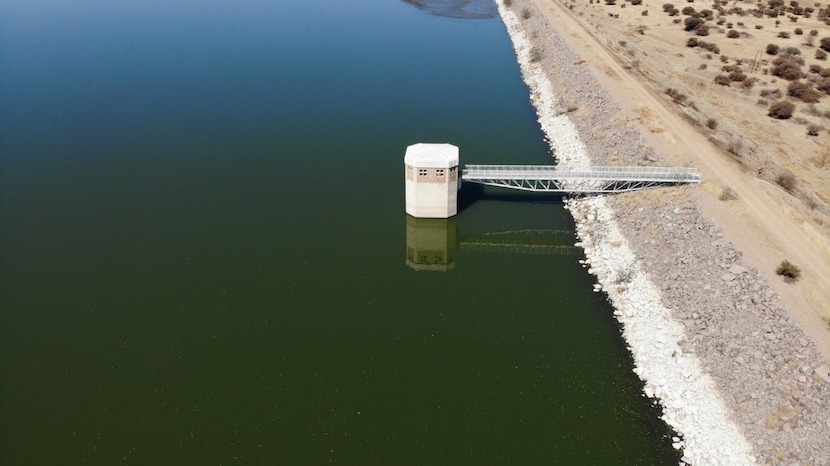 On how Setumo Dam was a trial project to prove to the government the technology works:

Part of it was the trial effort to prove to the government that this technology works. Secondly, I think if you know the Mafikeng area, each and every little mall has got more than two water shops, all distributing water because the water is a big issue in the area. For the first time, there was water you could drink straight from the tap. There are no foul odours or tastes in the water, and it definitely complies with the South African Bureau of Standards (SANS 241), our standard for drinking water quality.

On how they cleaned up Roodeplaat Dam:

The Roodeplaat Dam project caught us off guard and it was a very quick execution last year. We were contacted by the Department of Environmental Affairs, Forestry and Fisheries, which was assisting the SA rowing team. The rowing community is situated on Roodeplaat Dam because of its perfect conditions. The wastewater treatment works was flowing into the water and it’s also notorious for the cyanobacteria. At that point, SA Rowing did a water quality test and they weren’t allowed to go ahead with the SA Schools Championships Rowing Competition because they couldn’t expose the kids to the cyanobacteria. They asked us if we could come and intervene. I think it was in a week we had to launch and get the product on site, get the necessary permits because you can’t just go and treat these big water bodies. You need to get permission from Water Affairs and Environmental Affairs. We did the treatments, brought the cyanotoxins below the maximum threshold and the competition could take place. 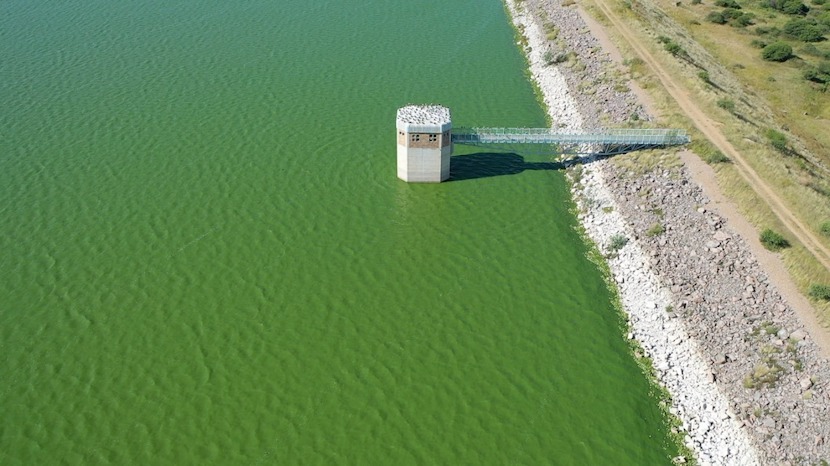 On treating other dams and future contracts:

The investment was quite large and was made specifically to showcase this. It is a lot of money and, for us, we got quite a lot back from the specific project. We could build a case study to prove to the water boards that there are huge capital savings on the treatment costs, so it makes their treatment costs more affordable. Through that, it’s easy to tackle the cyanobacteria problem. The challenge we had is that the dams are the responsibility of the Department of Water Affairs and in the operation of the water treatment works, with the local authorities like municipalities, water boards, etcetera. So, because of this overlapping responsibility, it’s difficult to say who’s going to take responsibility for the clean-up and who would pay for such a project. It is quite challenging and we are working through that. The great thing is that we’ve got a solution to the problem and we can definitely address it.

On the health implications of blue-green algae and the elephants that died in Botswana:

What people don’t realise is that the cyanobacteria has got health implications. If you look at countries like the USA, as soon as they find the threshold above the safe limit of cyanobacteria on their dams, they close the dams. They close it completely, so no water gets treated from there. No people can access the water in it and that’s not the case in South Africa. I think we still have a long way to go before our institutions realise what the health impacts are. In South Africa, the TV programme, Carte Blanche, reported twice on the toxicity in the Hartbeespoort Dam. So, you know, we still face quite a big challenge. But for now, we focus on the smaller dams, the irrigation dams and on the farming sector. There are a lot of farmers with the same problem because of the nutrients of the fertilisation of the lands. So that’s what we do right now.

I don’t know if you are aware of all of the elephants that died in Botswana a couple of months ago. That is due to cyanobacteria. They’ve got a very big issue with these toxins and there have been many studies that have proven that these toxins are the cause of Alzheimer’s disease as well.